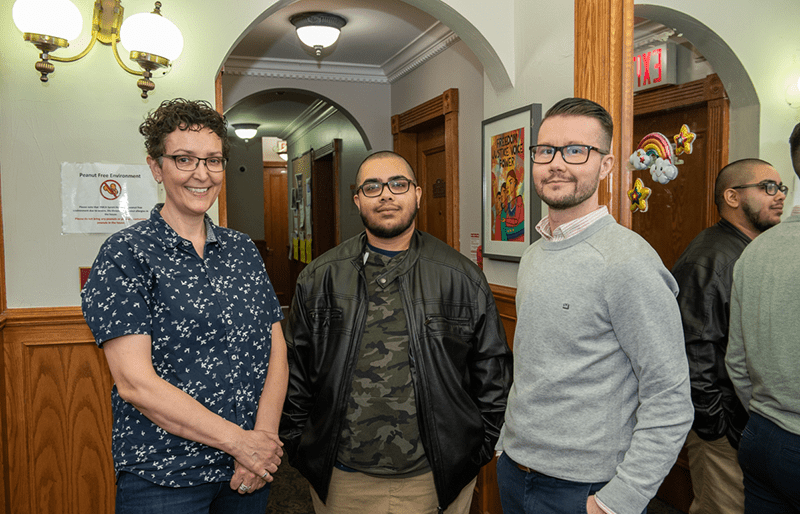 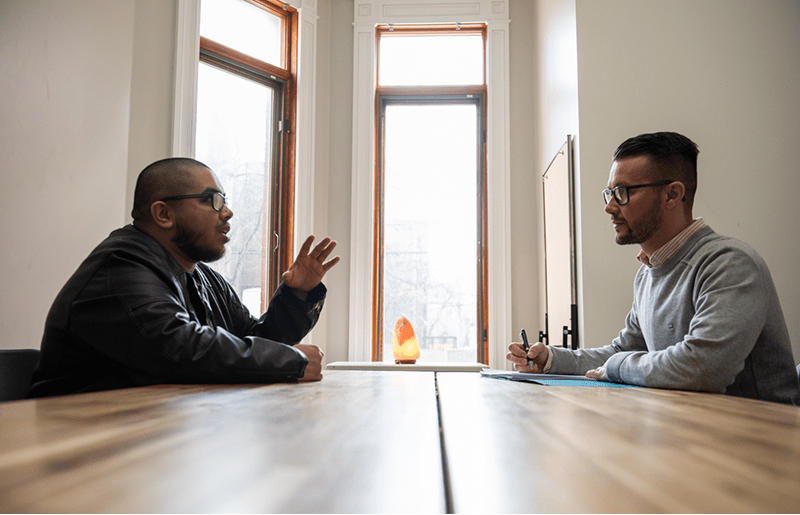 “The award-winning study included in-depth one-on-one interviews with residents of Sprott House, both at the beginning and end of their stay. Shown here: Skylar, resident and participant in the study, and Dr. Abramovich, lead researcher.” 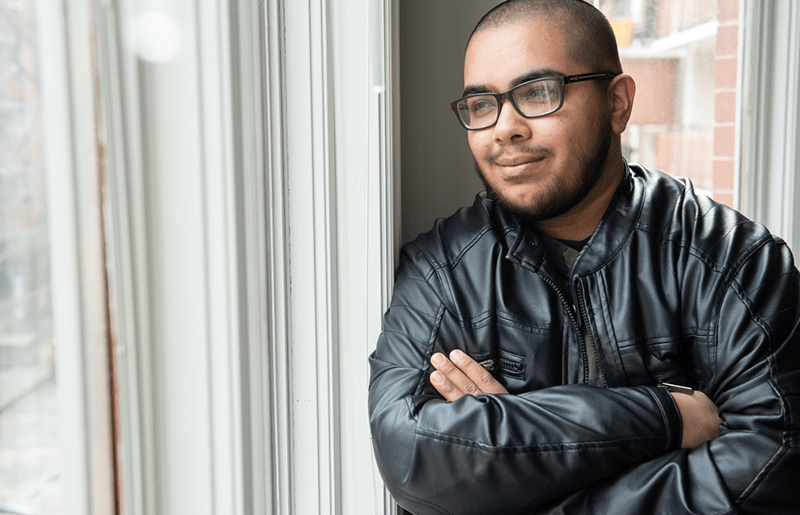 “Skylar found a supportive community and stability at YMCA’s Sprott House, thanks to staff and programming specifically designed to meet the needs of LGBTQ2S youth. 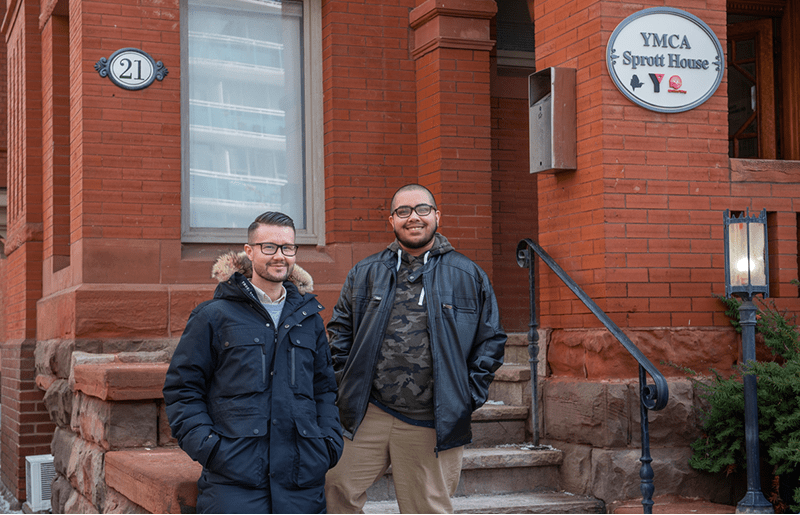 For many of us, home is a sanctuary. For 17-year-old Skylar King, his Scarborough, Ontario home had become a toxic environment. His family refused to accept his coming out as queer and after one particularly difficult incident, he left home. At first, he stayed at a regular emergency shelter in Toronto, but it could often be scary.

“It can be hard staying there if people can tell that you’re queer,” says Skylar. “People have the mindset of being on the street. They’re trying to be tough and it’s not a safe atmosphere.”

When Skylar heard that YMCA’s Sprott House was opening in downtown Toronto, he jumped on the opportunity to apply.

“I felt comfortable talking to the staff about past trauma,” says Skylar. “They were always available and there were no trust issues. They helped connect me to resources, like the food bank and breakfast programs. They made sure I made it to my medical appointments, and held on to sharp objects if I was worried about self-harming.”

Now 21, Skylar has finished high school and found an apartment with his partner, who he met at Sprott House. With the help of the shelter staff, he also learned strategies to help him reunite with his mother.

This award winning research study looked at the outcomes of #LGBTQ2S youth once they accessed supports at YMCA’s Sprott House in #YYZ. Youth like Skylar found a support community at the transitional home.

Skylar’s experience supports the findings of an award-winning study led by Dr. Alex Abramovich, a Scientist at the Institute for Mental Health Policy Research, Centre for Addiction and Mental Health and an Assistant Professor at the Dalla Lana School of Public Health, University of Toronto. Dr. Abramovich has been studying issues regarding LGBTQ2S youth homelessness for nearly 15 years.

The mixed-method study took place over the period of one year. Sprott House residents were invited to participate in in-depth hour-long interviews as they entered the program and exited one year later.

They also completed standardized surveys, collecting information on demographics, mental health and well-being, family connectedness and community participation. Dr. Abramovich also interviewed Sprott House staff and management to get their perspectives on what was working and what needed improvements.

“For me, the most important finding was that youth felt safe and at ease living at Sprott House — some for the first time in their lives,” says Dr. Abramovich. “Some even described feeling like they were part of a family, which was incredible for me to hear thatbecause so many LGBTQ2S youth do not feel safe and have been rejected by their family.”

The study showed the benefits of population-based housing in helping youth to gain more stability. Fewer of the residents were unemployed at the end of their stay, and more were enrolled in school. At the same time, the study revealed some areas for improvement — namely, the need for more mental health supports.

This research earned Dr. Abramovich and his team a 2019 CMHC Gold Roof Award for Housing Research Excellence ($10,000), which recognizes outstanding housing research in Canada. He hopes that positive results highlighted by the study will lead to more programs specific to LGBTQS2 youth experiencing homelessness.

“There’s a strong link between youth coming out and homelessness. We still don’t have accurate data on the rates of homelessness among LGBTQ2S youth across Canada but we estimate that of the 40,000 youth who are homeless, between 25-40% identify as LGBTQ2S. Most often the cause is identity-based family rejection.”

LGBTQ2S youth often encounter homophobia and transphobia at all levels in shelters and housing programs. Sometimes it is more subtle discrimination, such as policies and forms that aren’t inclusive, or staff that don’t respect pronouns. Sometimes it is more dangerous and can lead to bullying and violence, such as when staff make assumptions about whether trans youth should be placed on the  men’s or women’s floor, rather than giving them the choice of where they feel safest.

“The difference between Sprott House and many other shelters is that all of the programs have been designed from an LGBTQ2S lens and many of the staff identify as LGBTQ2S, making it easier for youth to relate to them. It makes a very big difference when youth can see themselves reflected in the staff who work at programs and when staff understand the importance of asking about pronouns and chosen names. The staff are familiar with LGBTQ2S programs across the city and can help youth access specific community resources,” says Dr. Abramovich.

He acknowledges that not every young person wants specialized programs, but that they should have options. Ultimately, he would like to ensure that every shelter can meet the needs of and is safe for LGBTQ2S youth.

With the onset of COVID-19, LGBTQ2S youth are experiencing even greater hardship. Dr. Abramovich is looking to secure funding to study the impacts of COVID-19 on LGBTQ2S youth at-risk of, and experiencing, homelessness. Many of the support services and drop-in programs that homeless youth rely on have been suspended. At the same time, they may be more severely affected by the mental health challenges of these difficult times. They already experience higher rates of suicidality, depression, and anxiety.

There are also countless LGBTQ2S young people who typically couch surf, are precariously housed, or were living on residence at university or college. With the COVID-19 crisis, they’ve suddenly been forced back into abusive family home.

For Dr. Abramovich, who identifies as queer and transgender, his research hits close to home.

“I grew up in Toronto where homelessness is such a prevalent and visible issue. Even as a young child, I had many questions about homelessness. Later, as a youth, I had a difficult coming out experience. So, my work comes from a very personal place. Now, more than ever, it’s important to find ways to support the most vulnerable among us.”

The study, “Outcomes for Youth Living in Canada’s First LGBTQ2S Transitional Housing Program,” was funded by the City of Toronto. CMHC’s Housing Research Awards recognize impactful and innovative activities in Canadian housing, like housing research, research training and knowledge mobilization outreach. The deadline to apply for the 2020 awards is July 17, 2020.