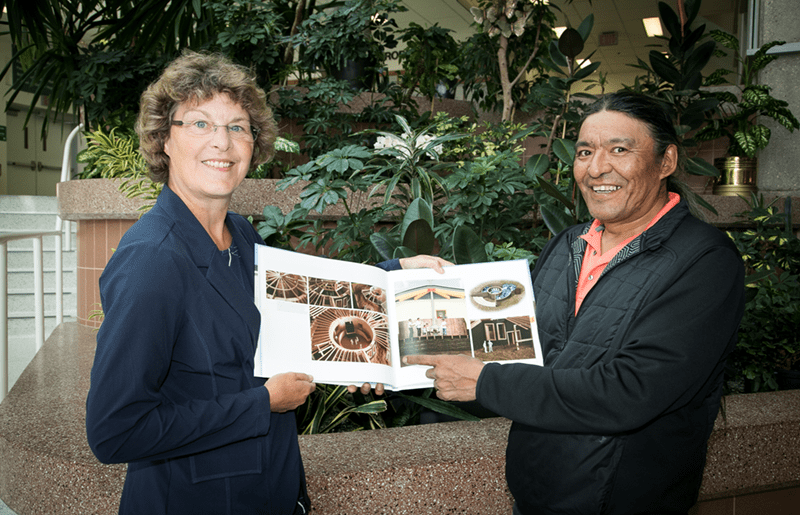 Dr. Linda Larcombe, University of Manitoba and research associate for the Sekuwe project Ivan Yassie, Sayisi Dene First Nation with the publication that documents the project. 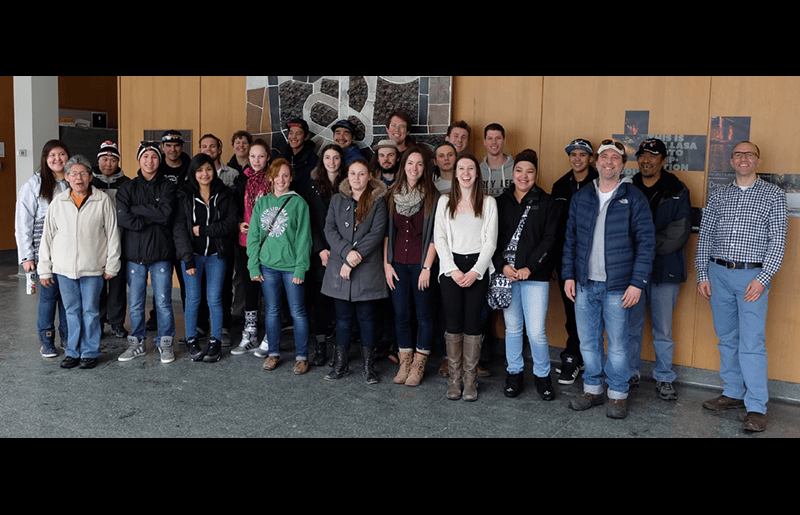 Dene and University of Manitoba students worked together on the Sekuwe project. 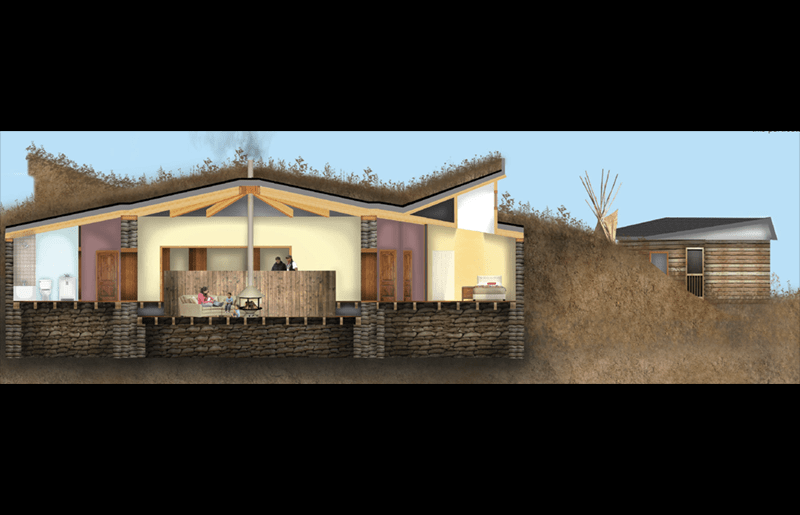 The Earthen Round House, designed by architecture student Jeannine Senecal, features native soil construction and a flexible central space for gatherings and ceremonies, or traditional activities like crafts, carving or meat preparation.

“In Tadoule Lake I feel a connection with the land that I don’t have in the city,” says Ivan Yassie. He’s describing his home in the Sayisi Dene First Nation in Northern Manitoba.

Patricia Dettanikkeaze is a young person living in Northlands Denesuline First Nation in Lac Brochet. She also loves the beauty and close-knit nature of her community. “We have a sandy beach, good fishing and a land bridge that leads to the airport. Everyone knows everyone. No one is a stranger.”

These fly-in communities are located on the 59th parallel, close to 1,000 km north of Winnipeg. Life here is intimately tied to nature and traditional practices of hunting caribou and fishing.

Unfortunately, the homes in Tadoule Lake and Lac Brochet weren’t built for the extreme climates of the North, or for the Dene way of life. The result is poor housing that threatens the residents’ health.

That’s why Ivan, Patricia and other Dene were eager to be part of a community-led research project, called Sekuwe (“Our House”). The aim of the project was to envision exactly what a healthy Dene home would look like.

“We need houses that keep people healthy. Places that are accessible, where Elders can live close to their families and get care. Places where we can we can keep the culture and traditional lifestyle alive,” says Ivan.

The Canadian Institute of Health Research funded the research. The project was a collaboration and partnership between several groups:

This project stems from the partners’ earlier research linking poor housing conditions with a tuberculosis outbreak among Dene communities in the early 2000s.

Dr. Linda Larcombe is an associate professor in the Rady Faculty of Health Sciences. She has been closely involved in both projects. Speaking about earlier research she says, “Airborne infections can spread more easily and diseases can be more severe in housing that is overcrowded and has poor ventilation. We also saw that the design of the homes made it difficult to carry out Dene cultural traditions of hunting, fishing and community gatherings.”

Community engagement was a key part of the Sekuwe project. As a research associate on the project, Ivan coordinated his community’s involvement. This included several workshops to discuss and dream about what the ideal home would look like.

“After the first workshop, people began to talk about housing. It was a different kind of talk. It was about the future, it was about being Dene. Sometimes when people aren’t given an option, you forget about the possibilities,” says Ivan.

Architecture students used this input to create designs for homes that could stand up to the extreme climate. The homes would be well insulated and resistant to flooding and mold. They would use a wood stove for heat, rather than a gas or oil furnace, which is less reliable in the North.

Many of the designs also include gathering spaces, and flexible areas to prepare caribou and other meat and space to store hunting and fishing gear. They use building materials that local residents could provide and repair, which would support the local economy.

Ivan and other community members maintained that, as keepers of the housing of the future, youth needed to be part of the conversation. They were encouraged to imagine what could be possible, and to get a sense of the process to make it a reality.

Patricia was one of the students who participated in the study.

“I liked the chance to meet the other students and to tour the University of Manitoba,” she says. “One of the best parts was seeing the architects’ ideas for building homes that fit our culture – like places to hang and dry meat and caribou hides.“

The 2 communities are now looking for funding partners to help them bring the designs to life. In the meantime, the research partners are using the award money to explore better long-term care solutions for Elders. Often, they leave their communities when their health deteriorates. The goal is to allow them to age in safe, accessible homes, surrounded by their family and familiar land and traditions.

The President’s Medal is CMHC’s highest research honour. Its annual award recognizes a significant research contribution that has not only increased knowledge or understanding in one of the National Housing Strategy’s priority areas but that has also addressed a priority action area identified by CMHC’s President and Chief Executive Officer. In 2018, the priority area was social inclusion.

We want your opinion

We have partnered with Phase 5 to collect your views on our website. We want to make sure that you’re finding the content you need and ultimately, give you the best possible digital experience.

We're respectfully asking for about 10 minutes of your time.

For the record, all of your comments will be reported anonymously and in aggregate only. View Phase 5’s privacy policy.