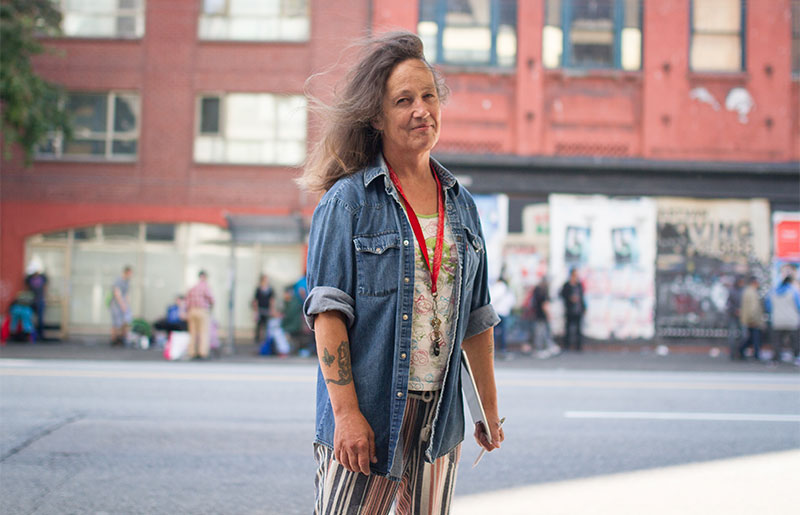 It’s been 8 years since Tamara lived on the streets. With stable housing and a little help from Atira staff, she’s never looked back. 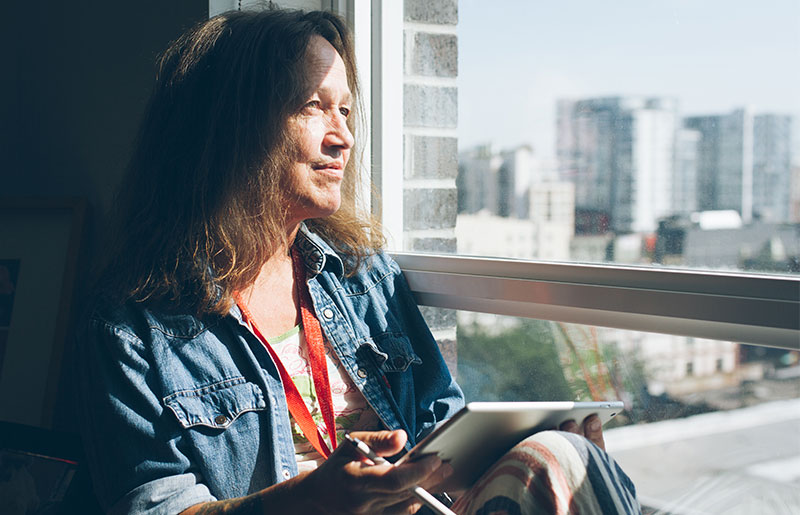 Tamara sits in front of her window overlooking the busy street below. It’s her favourite place to study and go over course material. 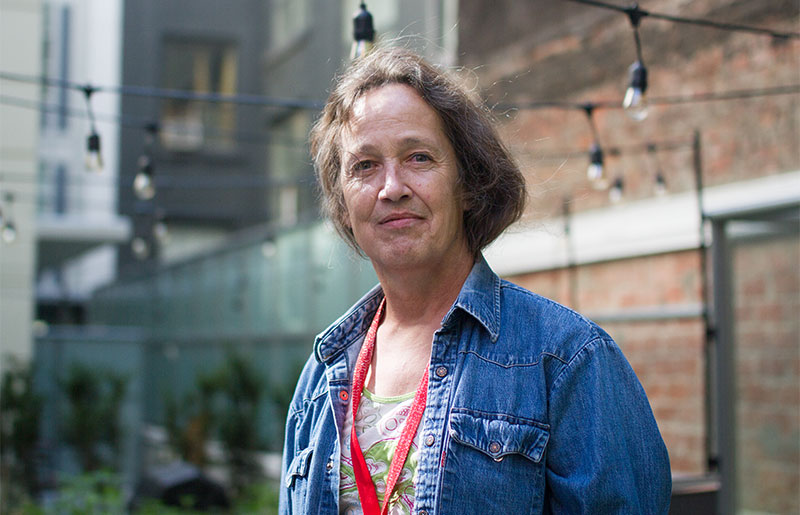 Tamara enjoys spending time in the amenity area at Olivia Skye, where residents of all socio-economic backgrounds come together to catch up, garden and BBQ. Some professionals use the area as a work space.

Mixed-income community a far cry from the streets

Vancouver’s Downtown Eastside is often associated with stories of drug use, poverty, mental illness, crime, sex work and homelessness. Lately, a new story is emerging: one of mutual respect and understanding.

Her quiet, shelter-rate studio apartment overlooks City Hall. It’s a far cry from her time on the streets. “I never thought I’d ever see the city like this,” she says, gazing out from her window.

Coming to terms with her gender identity in a traditional French-Canadian military family in the ’60s and ’70s was difficult. At 14 years old, lacking the support she needed, Tamara ran away. Despite being alone, she persevered. Tamara completed a bachelor’s degree and became a computer programmer.

In 1984, Tamara moved to Vancouver hoping to settle down in a more tolerant city. Her experiences did not match her expectations, however. Her immediate community rejected transgender people. She also became increasingly unhappy with her biologically male body. This combination of factors spiraled her descent into homelessness.

After living on the streets for 8 years, Tamara feels safe & supported in her new home at Olivia Skye. This mixed-income community in Vancouver’s Downtown Eastside gives her hope for her future.

For more than 8 years, Tamara lived on the streets.

“I had my house on my back like a turtle,” she says. “I was working on the street to buy my dope.”

Tamara suffered from chronic depression and suicidal thoughts. The turning point came on a cold September night in 2010. She was attacked by a man while sleeping on a sidewalk. She was left with a leg in a cast and very little hope.

An outreach worker found Tamara and convinced her to seek shelter in an all-women Atira social housing building. “I was surprised — they were really trans-friendly,” she says.

Tamara’s health improved. She stopped smoking and using drugs and returned to a healthy weight. Most importantly, with safe and stable housing, she finally became eligible for a long-awaited gender reassignment surgery.

After completing her physical transformation in 2014, Tamara moved to an individual apartment in the Atira building — a first step toward independent living. She also returned to school.

“I like to be challenged,” she explains. Encouraged by a sponsor, she is pursuing an adult upgrade program to attain a master’s degree in astrophysics. She is already achieving higher grades than her classmates.

Tamara enjoys independent living at Olivia Skye. The thing she loves most, however, is her neighbours. Most of them are working professionals looking to save money on rent.

“They are friendly, positive, and say hi to you,” says Tamara. “Living in a mixed-community building allows me to keep my eyes and chin up.”

Tamara thinks that a mixed-community project like Olivia Skye helps fight prejudice about people who are getting back on their feet from living on the streets.

“It’s motivating to live in this kind of environment. It pushes us to step up and continually better ourselves. We’re on this journey together.”

The Olivia Skye project received funding from the Government of Canada through Canada Mortgage and Housing Corporation and the Government of British Columbia through BC Housing. The funding is under the Canada–BC Investment in Affordable Housing Agreement.