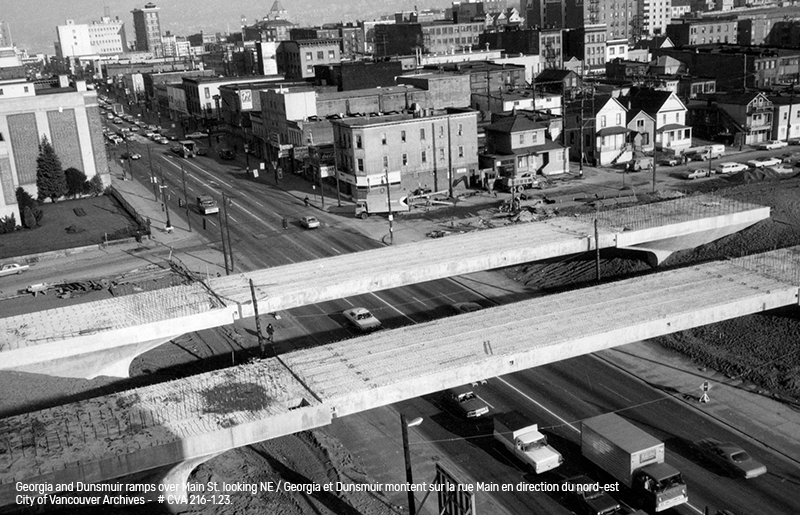 In the early 20th century Hogan’s Alley was home to Vancouver’s only Black community. By 1970, the community was destroyed to make way for the Georgia and Dunsmuir viaducts. 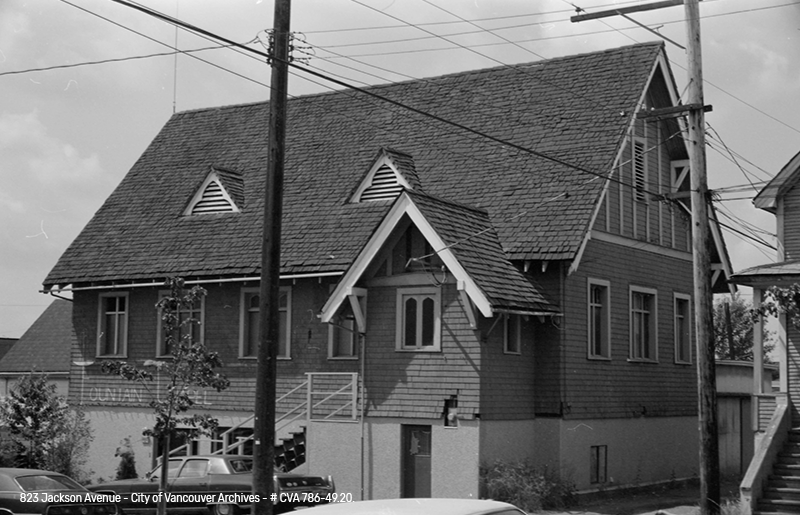 Hogan’s Alley’s was home to The Fountain Chapel, the city’s only Black church. Local resident Nora Hendrix, grandmother of Jimi Hendrix, was the driving force behind the purchase of the church.

Stephanie Allen and the Hogan’s Alley Society want to reimagine a lost part of the city.

Its residents included Nora Hendrix, the grandmother of famed musician Jimi Hendrix, who lived in the community starting in the 1920s. Hogan’s Alley thrived until a series of decisions resulted in displacement of the community by 1970. The area was razed to build a viaduct to support a highway travelling through downtown Vancouver.

“It was an approach of regarding some places and lives as deficient or substandard. The idea that they must surgically remove blighted areas of town that were compared to cancers in the urban landscape,” says Stephanie, who sits on the board of the Hogan’s Alley Society.

Neighbouring communities protested and the highway was never built. However, Hogan’s Alley was destroyed, its residents scattered to other parts of the city. Many businesses were lost entirely. It was the first and last time there was a concentrated Black community in Vancouver, Canada’s third largest city.

Hogan's Alley was at the heart of #VAN’s #Black community. By 1970, it was destroyed to make way for a highway. CMHC played an unfortunate role in funding this displacement. Today they’re working with Hogan’s Alley Society to reimagine the area.

CMHC played a role in the destruction of Hogan’s Alley. Under the National Housing Act, CMHC funded up to 75% of what was incorrectly termed “community urban renewal”. This paved the way for the City of Vancouver to raze Hogan’s Alley.

“It had impacts on a number of Black communities in Canada,” says Stephanie, noting the same program was often used to redevelop poorer or less desirable areas of cities, which disproportionately impacted communities with more Black residents.

In June 2020, CMHC publicly apologized for its role in the forced resettlement of Black people in Hogan’s Alley.

“CMHC rejects racism,” says Evan Siddall president of CMHC. “We are committed to working with government and community partners to atone for our past racism and insensitivity. This includes our role in funding the forced resettlement of Black people in Hogan’s Alley in Vancouver as well as other communities in Canada. We know we need to do better and we will do better.”

In 2015, Vancouver City Council voted to demolish the Georgia St. and Dunsmuir St. viaducts and undertake a large-scale redevelopment of the area that includes the former Hogan’s Alley.

Around the same time Hogan’s Alley Society developed a proposal for a non-profit community land trust on the former Hogan’s Alley block and submitted it to the City of Vancouver in 2018.

It is also part of the society’s larger goal: to change the way housing is delivered in Canada. “We are committed to partnering with the Hogan’s Alley Society and Vancouver’s Black and African diaspora communities to ensure their long-term involvement and investment in the future of this area,” says Gil Kelley, general manager of planning, urban design and sustainability, City of Vancouver.

“The Northeast False Creek planning process has become a unique opportunity for cultural healing and redress in Vancouver.”

A key focus for the city is prioritizing the needs of people who face anti-Black racism and persistent social and economic exclusion. This includes working with the Black and African communities to acknowledge and address historical wrongs, identify and remove barriers to full participation and cultural expression.

“Our aspiration is to once again make the Hogan’s Alley block a focal point for the Black Community,” says Kelley. “One that is welcoming and inclusive to all – a place ‘from the community, for the community’.”

CMHC has committed to working with the Hogan’s Alley Society and other partners to maximize the housing and community outcomes for the Black community in Vancouver. With more work and learning ahead, CMHC commits to exploring all options together with the Hogan’s Alley Society to help build a stronger Vancouver where everyone can feel they belong.

Eliminating housing discrimination in Canada is an essential, strategic requirement for CMHC to achieve the aspiration that, “by 2030, everyone in Canada has a home that they can afford and that meets their needs.” CMHC is taking concrete actions to eliminate racism and embed equity into its culture, programs, and policies so that they reflect the lived experiences of all Canadians. Progress reports on CMHC’s anti-racism and equity work will be provided through the Annual Report and Corporate Plan.