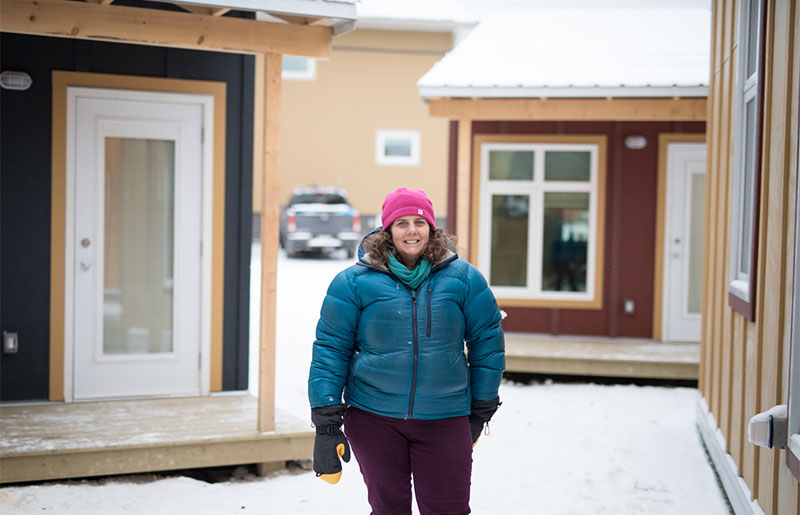 “We’re trying to build a community, not just housing units,” says Patricia Bacon of the new development in Whitehorse. 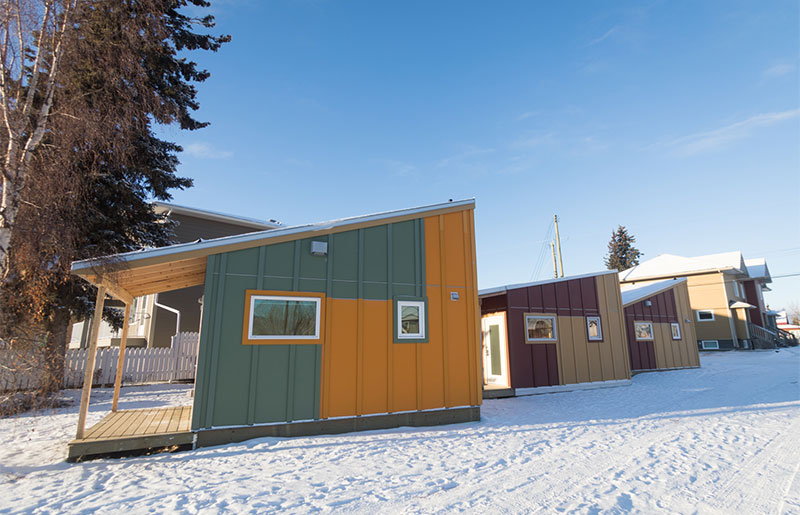 The innovative, energy-efficient design of the homes makes them relatively inexpensive to operate and build. This is an important consideration for projects in the North. 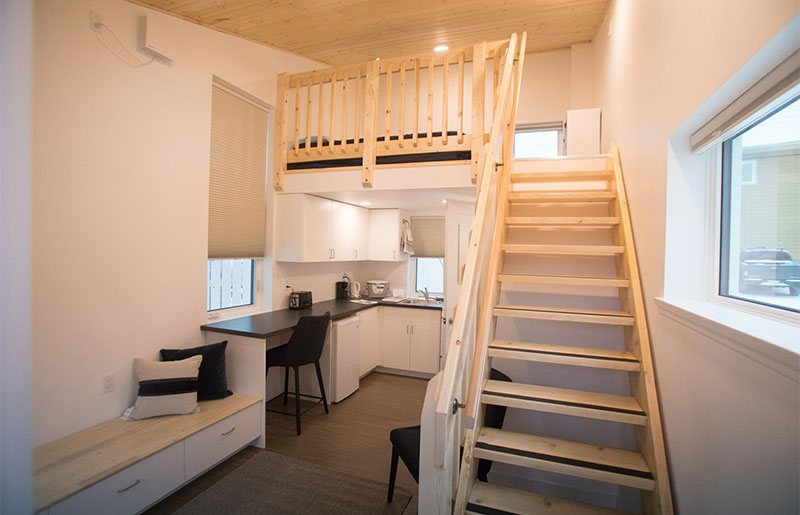 All 5 of the standalone 240-square-foot units provide accommodation for people at risk of homelessness. Additional support services are provided by Blood Ties.

Patricia Bacon is ready to address the crowd gathered in front of her. It’s a frigid January afternoon in the Yukon, and it’s time to cut the ribbon on a small — very small — housing project for people experiencing homelessness in Whitehorse.

“The layperson always asks, ‘Why can’t we just build more housing?’” Patricia says to the crowd. “Well, for those of us in the know, we understand that the problem of homelessness can’t be solved with just hammers and nails. It’s not that simple.”

Patricia is the executive director of Blood Ties, a Whitehorse-based non-profit that works to eliminate barriers to housing for people in need. The organization also strives to create equal opportunities for access to health and wellness services.

In spring of 2017, Blood Ties began to play an even more active role in solving homelessness in Whitehorse. It became clear early on that building a large multi-unit residential building wasn’t the right choice for the community.

This #tinyhome community in #Whitehorse is helping people experiencing homelessness have a place to call home.

“It can sometimes send the message that people in need are only allowed to stay in one place, alongside other people in need,” Patricia explains. “And that’s not what our organization wanted to create.”

Sleeping outdoors in a northern climate is extremely challenging, and limited accommodation options can lead to difficult situations. With the help of government partners, generous private donors and dedicated tradespeople, the Steve Cardiff Tiny Home community was completed in January 2019. It’s named after the passionate housing advocate and NDP MLA who died in a car accident in 2011.

Each of the 240-square-foot units enables one person to live comfortably with dignity and respect. Blood Ties also provides additional support services.

“The people who live here have their own space to maintain and be proud of. We’re trying to build a community, not just housing units,” says Patricia.

The innovative, energy-efficient design of the homes also makes them relatively inexpensive to operate and build. This is an important consideration for projects in the North.

This project was funded by the Government of Yukon’s Victim of Violence program, which is funded in part by the Investment in Affordable Housing Agreement (Social Infrastructure Fund).