(Visual: An elderly man, John Faulkner, is being interviewed in front of a wall of books. The video cuts back to the outside of the building to show the address: 620 McDiarmid Place.)

00:20
Our little story — you know, 20 people getting into a room and saying, “We’d like to build an apartment building” and get this on time, on budget. And then, five years later, 2105 is coming up and that’s going to be better!

(Visual: Several elderly men and women are sitting at a long dining table drinking coffee. Another elderly man is serving them. The video cuts back to Faulkner being interviewed. Then, a quick series of shots: a room with a bookshelf and a couch, the front entrance to the building, and a vegetable garden outside the building. Then the video goes back to the interview with Faulkner.)

(Visual: A man and woman in construction uniforms are pointing at the unfinished building and talking to each other.)

00:43 – Harvey Douglas, Construction Coordinator
It’s all been a natural process that these people have come and said, “Yes, we want to take part in a project like this.” And with over 100 people on that list, we were able to go to the government officials and the City of Brandon and say we can do this project again.

(Visual: The video cuts to two different shots of the elderly people at the dining table drinking coffee. Then it shows an interview with an elderly man, Harvey Douglas, in a chair. A clip of the outside of the building mid-construction is shown, then the inside, where a man and a woman in construction uniforms are walking up unfinished stairs and speaking in a hallway. Then the video cuts back to Douglas’ interview.)

(Visual: The outside of the completed building is shown. There is a large flower garden to the side.)

1:05 – Doug Grossart, Resident
It’s really nice to have your own space but yet, you can just walk out the door and you’re sort of in a community space. That’s one of the real selling points about this type of a building.

(Visual: An elderly man, Doug Grossart, is being interviewed on a couch. A clip of an elderly man and woman walking by the dining table is shown. Then the video cuts back to Grossart’s interview.)

1:19
(On-screen text: They built more than a building)

(Visual: The parking lot outside the building is shown.)

1:22 Catherine Enid Lochhead, Resident
The things they do here and everything is unique. You got somebody around, you’re not all alone and I enjoy it very much. Everything is there and it’s all open for you. And if you need help, there’s help here that you need.

(Visual: An elderly woman, Catherine Enid, is being interviewed in front of a bookshelf. Then the video cuts back to the people drinking coffee. Enid’s interview is shown again.

(Visual: An elderly man is getting his coffee from a counter beside the dining table. Clips of a shelf filled with random knick-knacks and photographs are shown. It cuts to a table filled with framed photographs of the residents’ grandchildren. Then it shows clips of the garden.)

(Visual: John Faulkner is being interviewed. The group at the dining table is shown again, where an elderly man is pouring coffee for the other residents. The video fades to white.)

2:13
(On-screen text: We can all play a role in improving housing outcomes.)

Affordable housing for seniors, by seniors

A group of seniors in Brandon, Manitoba saw a lack of affordable housing in their community, so they decided to build their own.

Known as Brandon Seniors for Seniors, the group formed a co-op in 2009 called the Western Manitoba Seniors Non-Profit Housing Co-operative. Their first initiative was 620 McDiarmid Drive in Brandon. The 34-unit development was planned, developed and is now fully occupied.

With the success of 620 McDiarmid, the group is in the process of developing a second affordable housing development. Construction began earlier this year on 2105 Brandon Avenue, which will be a 63-unit building. It will have 15 market rent units mixed with 48 units of affordable housing.

“It’s all been a natural process with these people that came and said, ‘Yes, we want to take part in a project like this,’” says Harvey Douglas, the construction coordinator.

And the result — housing by seniors for seniors — has been overwhelmingly positive. 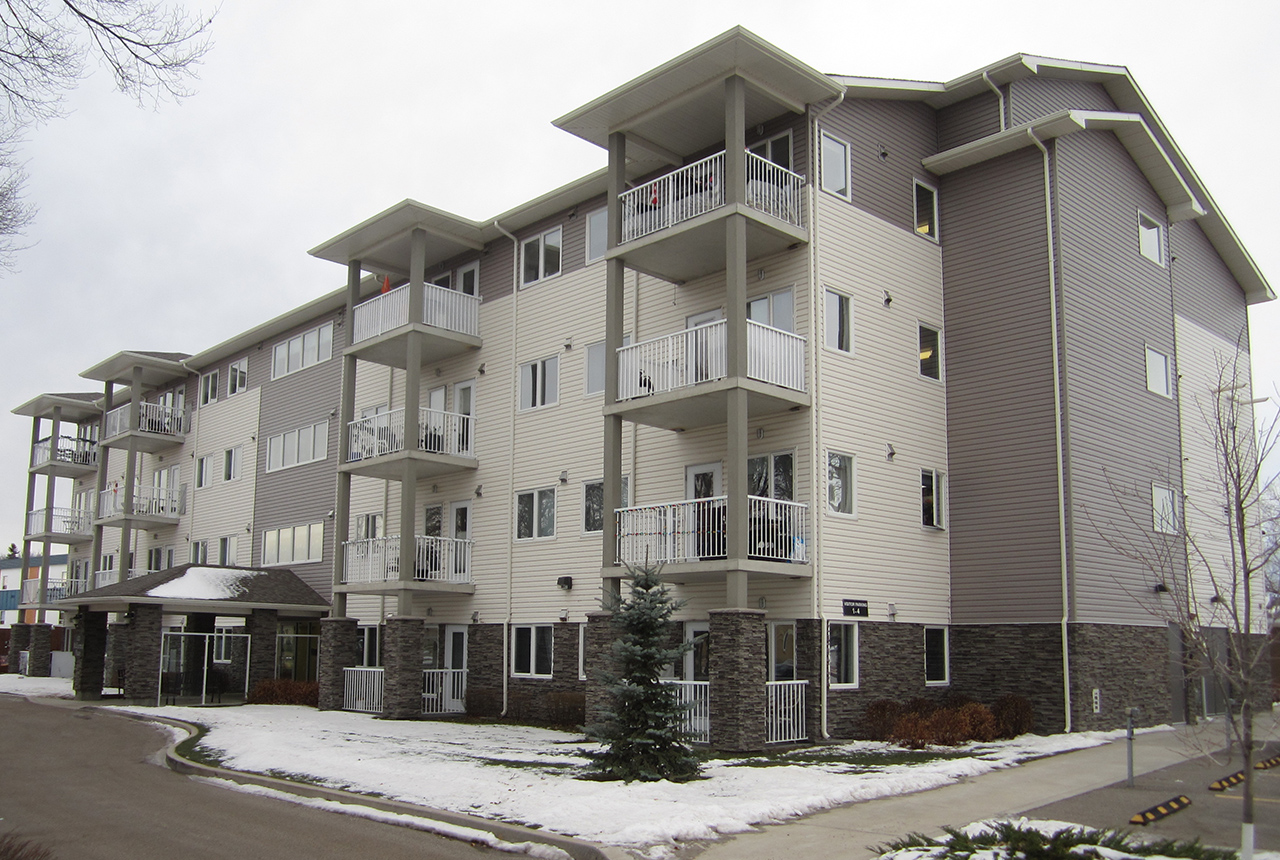 “It’s really nice to have your own space, but yet you can just walk out the door and you’re sort of in community space,” says resident Doug Grossart.

Another resident, Katherine Enid Lochhead, agrees. “You’ve got somebody around, you’re not alone,” she says. “I enjoy it very much.”

This project received funding from Canada Mortgage and Housing Corporation and the Province of Manitoba through the Canada-Manitoba Investment in Affordable Housing Agreement.